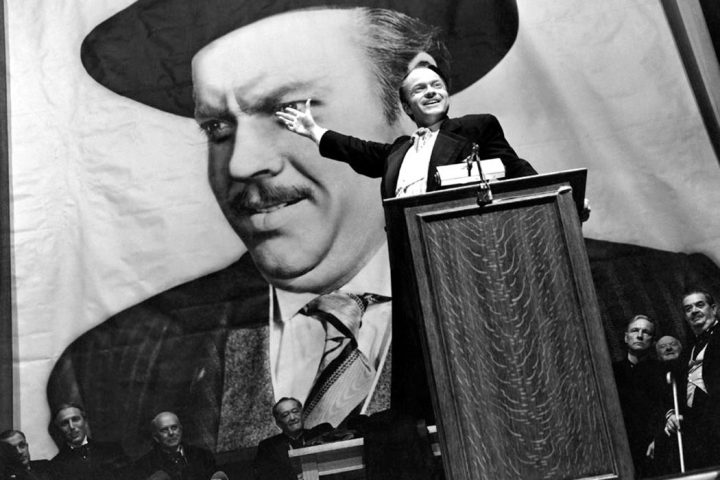 The analysis of the film Citizen Kane (1941) recognizes three key scenes. These main three scenes reflect prominent segments in the movie. The first scene is during the campaign where Charles Foster Kane threatens to expose the evils of Jim W.Gettys and works in a bid to manipulate the press coverage and ascend to governor seat. This scene is at around duration time 1:01:07 (one hour, one minute and seven seconds) run into the film. The campaign scene brings a blissful mood, and the theme focuses on the dirty part politics. This scene exposes the major conflict in the film. The second fantastic scene runs when Kane’s political competitor, Jim W.Gettys pushes for a showdown in the presence of Kane’s wife (Emily Monroe Norton) and Susan Alexander to compel Kane from the governor seat at 1:08:11. The third key scene is when workers at Kane’s owned press grapple which news to write after Kane had lost the election at 1:10:12 runtime of the movie.

First, the notable scene is during the campaign at 1:01:07 (one hour, one minute and seven seconds). The dramatization exposes a political gathering where people dressed formally are seated behind the Kane, and there is an audience in front. Kane authoritatively speaks and attacks his political competitor while his supporters clap in applause. It dramatization reveals a true political arena as Kane delivers political rhetoric to the audience. Kane portrait is hanged in the background. The video editor entails fade in and fade out methods while joining several shots for the continuity in scene shots from the audience, Kane, and Jim W.Gettys are alternated. Kane utilizes the characters freedom of movement while viewers are seated. Kane appears balanced, comfortable, and natural in away showing heroic motion. The scene employs an exemplary sound montage. Hastened violin sound provides continuity from one scene to another after the campaign (Giannetti, 67). The scene uses long shots, full shot medium and even close –up when showing Kane, background, audience and Jim W.Gettys who views the campaign proceeding from the upper ground.

The second fantastic scene emanates from 1:08:11 run into the film. The scene occurs in 185 West seventy-Fourth Street house where Jim W.Gettys threatens Kane’s not to expose him. The scene takes place in a room in the presence of Emily Monroe Norton and Susan Alexander. The mood is tensed as Kane and Jim exchange accusations. Emily and Susan are confused and threatened by Jim. The scene used long shots at an oblique angle to show the people entering the room then maintained on medium shots while they were talking. Mise en Scene shows an aspect ratio framework 1.33:1 runs throughout the movie. The scene entails the use of fade in, fade out and sweep styles in editing for engaging continuity in the shots (Giannetti, 34). The dramatization presents disagreement between Jim and Kane, Emily moves away and request Kane to move with her, but he is unwilling saying that he will sort his personal issues. Jim unrelentingly warns Kane of his move through variation of voice tone amongst many other features.

The third scene shows confusion melancholic mood after Kane lost the election at 1:10:12 run of the film. Dramatization of the scene shows the dilemma editors have in selecting what information to present to its audience. They find it hard to report Kane’s governorship seat loss. The scene marks the falling action of the movie. The scene reveals a printing workplace where people perform different tasks. The video editing uses fade in and out to provide continuity in the scene. The scene entails the use of medium shot in the photography. A low, soothing sound creates exhibits a somber mood and provides continuity to next scenes.