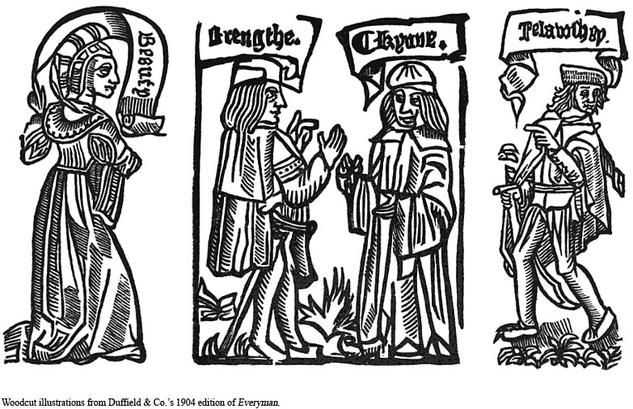 “Everyman” is a 15-century catholic morality play that is in a form of a sermon, teaching Christians to spend lives in seeking for life after death and not to rely on physical things of the world. The play revealed that there would be judgement after death, everyone would be held responsible for their own actions while on earth. The play serves as a great warning to the Christians who live a sinful life because it describes how they should live in order to avoid their souls being held captive by death. The author of “Everyman” revealed that only those who are enriched with material things of the world perish through death but those who believe in good deeds and live a holy life that God require of them would enjoy themselves in the eternal life after death. Only those who sin are afraid of death. The play depicted the struggle between evil and good, how everyman strived to choose between spiritual enrichment, relationship and riches of the world. The author of the play “Everyman” used the characters in play to reflect different aspects in the life of a Christian. The protagonist “Everyman” represents human kind who after a sinful life, seeks for salvation as the key to heaven. Good Deeds symbolizes a spiritual life that is away from sin while Kindred, Goods and Fellowship represent all the riches and lavish life that do not please God. Knowledge, Discretion, Strength, Five Wits and beauty imply those values that a Christian possesses while struggling in to choose between salvation and material wealth of the world. Life is a long journey that one is dedicated to and gives ground of making a choice of living a sinful life or receive salvation and expect a second chance after death.  Therefore, in the “Everyman,” the author portrays death as the platform on which spiritual life of man is built with God in heaven.

Perception and Treatment of Death “Everyman”

The play begins in heaven when God spoke, lamenting that, human beings have laid submissive to riches and material of the world and did not have second to have a relation with their father in heaven. The time had come when everyone would be liable for their actions on earth (Garner, 1987). God was frustrated with the kind of life people in Everyman had as the protagonist lived an evil life and had enriched himself with much wealth and never paid attention on his spiritual life. God then sent Death to call upon Everyman to appear before the judgement to articulate for his deeds on earth. When Death approached him, Everyman cries out that he had not ready and that he should be given at least more time to prepare. “Oh, Death, thou comest when I had thee least in mind” (Roth, 2007). Everyman was not expecting such uncertain news because he knew he had not cleansed his spiritual life and there needed some time to change. Death did not spare him and told him that his days on earth were over. Upon his persistent pleading Death sympathized with him and allowed him to find companions to walk with him through the valley of death. The protagonist had no choice but to approach his partners Kindred, Fellowship, Goods and the Good Deeds and sought for their company as he set for his journey of death. Everyman was sure no one of the companions would turn down because they have been together all throughout his life on earth. Shockingly, Good Deeds was the only friend who agreed to accompany him to death but unfortunately, Good Deeds was not as strong as the other friends because Everyman did not spend much of his time on him as he used (Frost, 2016). Everyman paid a lot of attention to kindred and Fellowship, but when the time he needed them most came, no one wanted to associate with him. Therefore, to make Good Deeds happy and strong, Everyman decided to go to church where he confessed and asked God for forgiveness. God forgave him and cleansed his sins away, making Good Deeds strong and ready to accompany him on his long journey with Death to heaven. On their way, they met Beauty, Five Wits, Strength, Knowledge and Discretion of whom Good Deeds convinced and agreed to join them, but when Everyman shared with them where his journey was going to end, they all ran away and left him with Good Deeds alone. Goods deeds vowed to accompany him to the end, Everyman died and rose to heaven with Good Deeds at his side where the Angel appeared and welcomed them. The play ended with the Doctor addressing the audience that, a man would only be accompanied with his Good Deeds after death.

Death as used in play had a great influence to the life of Everyman on earth and in heaven. When God commanded Death to face Everyman, allowed him to change from his sinful lifestyle and focused on his spiritual life. Therefore, the author did not just use Death a miserable thing in someone`s life but had great significant. He expressed Death as a friendly messenger from God, which served as a turning point. Everyman knew that if he dies before making peace with God would have had a chance to enter the Kingdom of Heaven. Death to the author, was a link between man and God in the eternal life, it was the best gift of a key to a new and better life.

Death is used as a warning to those who are absorbed in the riches of the world; the author implied that regardless of how much a man has in store, none of them would bar him from the wrath of Death (Duffy, 2017). It implied that man should draw his focus towards salvation rather than physical wealth that would not help or connect him with God but perishes after death. The author also used death as compulsory personal journey whereby each person has to go through it and has no physical companion. Everyman faced the death alone because other physical beings abandoned him. Good Deeds accompanied him because he lived inside him, according to the author, Good Deeds represented his soul and no one can separate the soul from the spirit. When death approached Everyman, his soul was not clean and he sought how he could clean it and that is why he had to the confession and asked God to clean his soul through before he set for his journey.

The author also manifested Death as a tragedy where by everyone almost ran away from him. The characters of Cousin and Kindred clearly exposed how fearful they were about the fate of Everyman and their reactions when he told them about how his journey is going to end. Given that they were so close and they would stand for each other in case a problem befalls one of the member, but when they heard about Death, they all flew away and tried everything possible to avoid Everyman (Beavis, 2016). They did not want to be associated because they knew how sinful they were and were quite afraid to appear before judgement because God would send them to hell. The catholic mortality play further emphasized that those who sought salvation and made peace with their God were not Afraid of Death because it served as a channel where they unite with their God and Angels from heaven in the eternal life. Death was a serious apprehension to those that believed in the in physical world they believed that Death would serve an end to them. Everyman was much worried when Death knocked on his door at the time he had not reconciled with God; he was so frightened that he had to ask for more time but Death denies him.

The author underscores a clear message that Death treatment is similar to every person, everyone has to go through it and laid answerable upon his or her actions while on earth, the title “Everyman” was used to represent all human kind on earth and depicted similar treatment of Death. The only difference according to the author that would determine the fate of a man in the hands of Death is between those choosing good or evil (Johan & Juggler, 2017). The play passed a message that those who would have chosen to remain in the physical world would perish through Death while those that chose salvation and abided by God`s principles would rise and live forever with God.

In summary, the author used catholic morality play to perpetuate Death as a foundation on which man is freed from the struggle of life and marks his new journey with God in heaven. It is against the God`s doctrine for a man to struggle to possess much of the material wealth of the world and the only way to avoid death is to strive in seeking everlasting life with God through salvation. The play still has a place in the modern Christianity, where they recount on the life of Jesus and that through his death and resurrection came salvation.